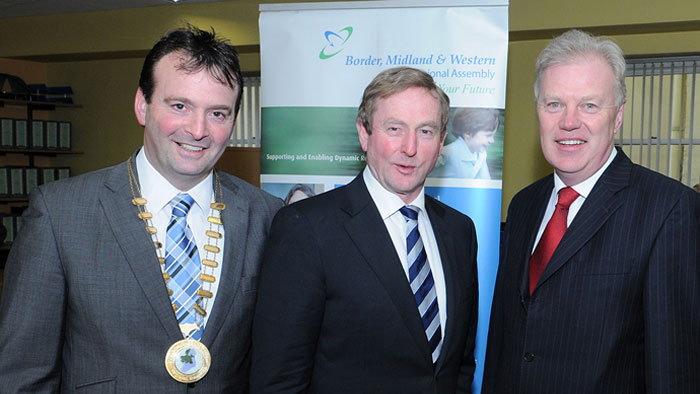 The Taoiseach, Mr. Enda Kenny T.D., launched TESLA a €3.8m European co-operation project at the Border, Midland and Western (BMW) Regional Assembly headquarters in Ballaghaderreen, Co. Rosommon on Monday April 16th. Speaking at the launch, the Taoiseach stated that TESLA, which focuses on innovative supports to small and medium sized business represented a brilliant addition to the opportunities for dynamic small companies and he emphasised that these companies have a key role to play in our economic recovery.

Mr. Kenny stated that European Regional Development Funds have played an important role in the development of Ireland’s economy and the financial transfers from the EU Budget provide vital supports to regional development. The Taoiseach acknowledged the ongoing role of regional bodies in Ireland and stated that there was a wealth of regional proposals that could be developed into achievable projects. The Taoiseach also outlined a number of Government initiatives to help enterprises access finance and to reduce bureaucracy for SMEs.

Councillor Cyril Burke, Cathaoirleach of the BMW Regional Assembly outlined the role of the Regional Assembly in ensuring the successful delivery of European Regional Development Funds Programmes over the past 12 years. He stated that the BMW Regional Assembly had successfully demonstrated its capacity to effectively manage both the previous and current funding periods, with more than €700minvested in the region over the past 12 years. Councillor Burke emphasised the need to retain a focus on the development needs of all regions and to avoid unbalanced regional development.

Following the launch, Mr. Gerry Finn, Director of the BMW Regional Assembly, stated that ‘the launch by the Taoiseach provided a valuable opportunity to highlight the work of the Assembly in managing and delivering EU programmes and in successfully securing additional EU funds. He stated that the Regional Assembly looked forward to leading the TESLA project, which he said, would support a large number of technology-based start-up firms in the BMW Region.

Kieran Moylan, Assistant Director provided the assembled audience with a brief overview of TESLA which is led by the BMW Regional Assembly in partnership with 8 organisations from six EU Member States. The TESLA project which is co-financed by the European Regional Development Fund under the INTERREG North West Europe programme, aims to provide a range of supports to early stage, technology-based start-up firms, with export potential. Dr. Moylan set out the 10 project actions which will be delivered in partnership with the Higher Education Institutions. These will help the supported firms to access innovation and product development supports and internationalise more quickly. Overall, 612 firms will access supports and 45 new high potential start-ups are anticipated.