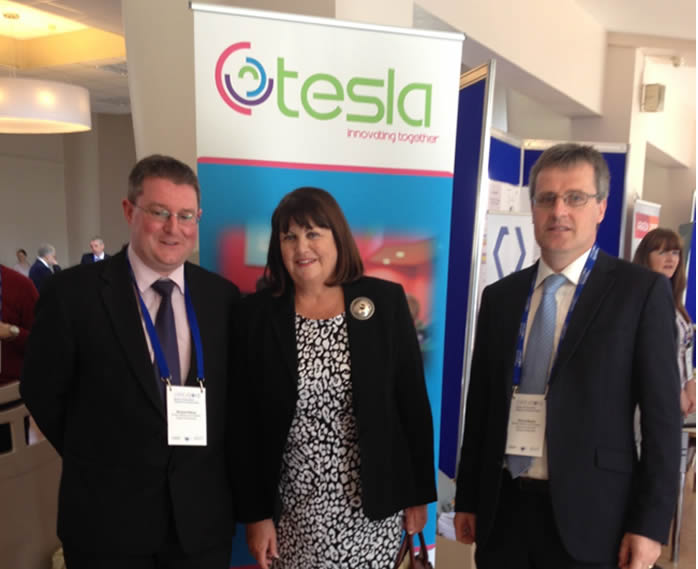 A high level  EU Innovation conference attended by over 300 delegates in Cork today heard how Interreg funding is being used to support the export development and Internationalisation plans of small firms across Europe.

Kieran Moylan, Assistant Director of the BMW Regional Assembly gave an overview presentation of  the TESLA project and the constituent pilot initiatives which are currently being delivered in the partner regions in Germany, Ireland, Wales, Belgium, the Netherlands and France. TESLA  is a €3.8m three year transnational Project part funded by the European Regional Development Fund under the Interreg North West Europe Programme. Speaking at the event Mr. Moylan added that:

“The TESLA project will have a positive impact at very local level in the partner regions. Early stage technology based firms both within and outside the campus business environment are benefitting  from practical joint transnational schemes aimed at providing key information on accessing new markets in Europe, accessing new finance opportunities and developing new products. In recent weeks , he added, companies in the BMW region and south west region of Ireland accessed key market intelligence on German market entry with the help of an Internationalisation expert from Germany.  These continued supports to small firms will help them gain a competitive advantage in the market place and at a broader EU level – help to raise levels of innovation in Europe”

Mr. Moylan also delivered an overview of an Audit of Innovation and Knowledge Intensive Services which was conducted in the BMW Region in 2011 as part of the EU Atlantkis project. This report will help to identify innovation priorities for the region and shape Ireland ‘s Smart Specialisation Strategy for the 2014 – 2020 Funding Period.

The EU Week of Innovating Regions (WIRE) Conference is an annual event hosted by the European Commission. The 2013 conference was held in University College Cork on June 6th and 7th as part of the Irish Presidency of the EU. The Conference was opened by EU  Commissioner For Research, Innovation and Science, Maire Geoghegan – Quinn who also visited the TESLA Project exhibition at the Conference.